Perhaps the Gods knew all along.
One day we would return to save them all.
Time is timeless.
300 years ago. Yesterday. Tomorrow. Now.

You must ask yourself, “What do I do?”
How do I fit into this endless sky?
KNOWING you are no different than the ones that came before.
Your dreams have no priority in this place, this past…
We. Are. All. One.

Yes, perhaps the Gods knew all along.
One day we would return to save them all.

Listen to the podcast of Yalie Nicholas Lewis’ interview with Hugo Perez: 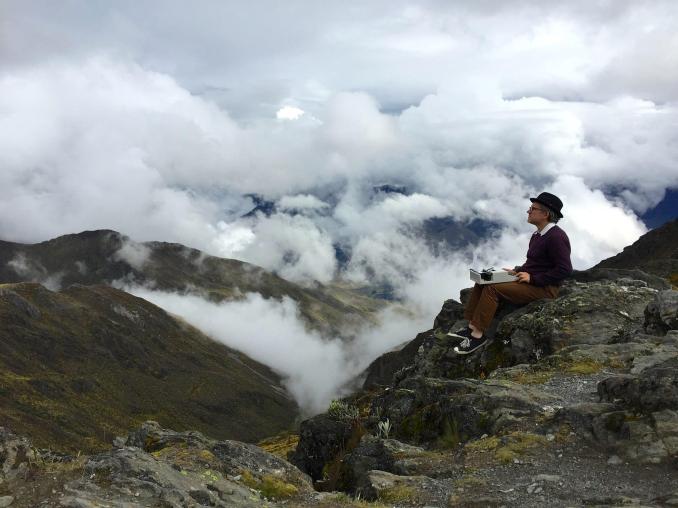 Nicholas talks to Hugo Perez on the role of a filmmaker and artist in times of social upheaval, intellectual dissidents, and of course his beloved books. Discover what inspires his creative energy and what you can learn from his journey.

I had the distinct honor to interview master painter Ablade Glover at his studio and gallery in Accra, Ghana. Professor Glover discusses the themes of everyday life in his paintings and his belief that everyone is an artist.

Please discover more of his work at Artist Alliance Gallery

Ashish Koul is a Singh Postdoctoral Associate in the Council on South Asian Studies at the MacMillan Center. Her work focuses on caste, Islam, and politics in South Asia, with law and gender as components within that framework. We talk with Professor Koul about her essay, “Making new Muslim Arains: reform and social mobility in colonial Punjab, 1890s-1910s.”

In this podcast series, World Fellows director Emma Sky talks with Fellows about their lives and work. To download and listen to all podcasts in the series, go to iTunesU or the World Fellows page on Soundcloud.

Barkil-Oteo is a psychiatrist consultant and adviser with Doctors Without Borders/Médecins Sans Frontières (MSF), which delivers emergency medical aid worldwide to people affected by conflict, epidemics, disasters, or exclusion from health care.

MSF in October was awarded the 2017 Pardes Humanitarian Prize in Mental Health by the Brain & Behavior Foundation, and Barkil-Oteo’s project was featured in this video.

“MSF doctors and nurses are often seen treating physical ailments: bandaging the war-wounded, rehydrating a cholera patient, or performing an emergency cesarean section. But for more than 20 years, MSF has also been providing vital psychiatric and psychological care to people ravaged by man-made or natural disaster,” the foundation stated in its award announcement. “The organization currently has mental health related programs in 41 countries across five continents treating adults and children who are victims of armed conflict, natural disasters, sexual violence, neglect, psychiatric disorders and disease outbreaks.”

Christopher Bayes, professor and head of physical acting at Yale School of Drama, helped students discover their inner clown at a workshop held in August at Yale Center Beiing.

Over the past years, Yale philosopher Shelly Kagan’s online course on death has garnered nearly 30 million views in China. In July, he taught a weekend workshop at Yale Center Beijing (YCB) on “Death and the Meaning of Life” to over 50 Chinese executives (including the president of SOHO China), professionals, students, and others.

“The class offered me a unique opportunity: to teach my material in a classroom setting with a very different audience from my usual Yale undergraduates,” said Kagan. “There were high school and college students but also businesspeople, artists, scientists, lawyers, and family members, all taking the class together. It made for lively discussions and provided an unusual change for me to discuss philosophical ideas with people who didn’t always share my Western outlook. A wonderful experience. And the staff at YCB, who made it all possible, couldn’t have been friendlier or more professional.”