Below is a message from the Yale Club Singapore regarding a cocktail event on July 24th.

Here is an update for the Yale Club, followed by DUAL items further below.
Yale SOM Cocktails
Join the Yale SOM contingent for a cocktail event to welcome those SOM-ers arriving in Singapore or newly departing for New Haven, and also catch up with Yale’s MBA Sr Associate Director of Admissions, Amy Abood! The event serves to welcome new enrollees at Yale SOM, Singapore-located SOM interns, and those who have arrived from New Haven into Singapore. And just as important, it’s also a great chance to catch up with one another!!

Vietnam has a long and troubled history with China. After the chill caused by the 1979 Chinese invasion of Vietnam and subsequent tussles over the South China Sea, the two nations normalized relations in 1991 for cross-border trade and diplomacy. Still, the Vietnamese people are not so quick to forget as indicated by unprecedented protests during summer of 2018 over a proposal to designate three special economic zones in sensitive areas with 99-year leases that would likely land with Chinese corporations. “Vietnamese leadership today walks a tightrope of balancing official condemnation of Chinese actions in the South China Sea with a pragmatic approach to trade and investment cooperation,” explains journalist and filmmaker Tom Fawthrop. “June’s mass protests reflected sentiment that Vietnamese people no longer trust their government to achieve the right balance with Chinese investment projects often tainted by corruption, lack of transparency and land-grabbing.” Protests united anti-communist dissidents and former government officials alike, forcing the government to delay the law’s passage until May 2019. Fawthrop concludes that Vietnamese leaders must develop a vision for development and a strategy for protecting the nation’s culture and independence from China’s regional hegemony. – YaleGlobal
https://yaleglobal.yale.edu/content/china-fuels-vietnams-protest-movement

Please save the date for Tuesday, Dec 11th and join your fellow Yalies for holiday cocktails at the Singapore Cricket Club!

Join us to celebrate the merriment of the holidays!! Hosted by the Yale Club of Singapore and jointly Yale SOM. Please contact Sojung above for placing your name on the Singapore Cricket Club’s guest list.

We will once again be having a bit of fun raising funds for the charity “Food from the Heart” http://www.foodheart.org/. Seats are limited – we have a full house every year with a waiting list. So sign up early!! Seats are only confirmed once payment is made. Once paid, you are responsible for finding a replacement if you no longer can attend, but we can help link you with someone on the wait list (if any). No refunds for no shows.

Working in partnership with the NY-based American Indonesian Cultural and Educational Foundation (AICEF), Yale University and Wesleyan University are pleased and honored to host His Majesty Sri Sultan Hamengkubuwono X, the Governor/Sultan of Yogyakarta, November 6 – 11.  The Sultan has a most distinguished historical and cultural position in Indonesia, and will be traveling with a group of court musicians, dancers, and a puppeteer from the Kraton Palace of Yogyakarta. A diverse schedule of performances, symposiums, workshops, campus tours and high level meetings have been planned to foster greater understanding of Yogyakarta’s unique contribution to world culture as well as to foster institutional ties.

Yogyakarta is a special region within Indonesia, created in acknowledgement of its local leader’s major contribution to the 1945-1949 revolution against the Netherlands, which had ruled it for 350 years.  Americans may know it for the music of its large percussion orchestras (gamelan), shadow puppet theater (wayang), wax resist textiles (batik), ancient temples (Borobudur), silver jewelry, and an active volcano (Merapi).  Yogyakarta is also a city of education and philosophy, housing some of Indonesia’s most advanced universities and religious institutions.  The traditions and philosophy of its courts led by a Sultan, who also serves as the special region’s governor, continue to nurture the spiritual and intellectual life of not only Yogyakarta itself but the nation as a whole.  The current Governor/Sultan of Yogyakarta, Hamengkubuwono X, and his father played major roles in the birth of the Indonesian democratic republic in the 1940s as well as its rebirth in 1998 following 45 years of authoritarian rule.  He continues to play a stabilizing and modernizing role today, arbitrating the political and religious cross currents of the world’s fourth largest country.

While at Yale, the Sultan is especially interested in the Yale Art Gallery’s unique collection of wayang puppets from Indonesia (see the Dr. Walter Angst and Sir Henry Angest Collection). There will be a special performance of a shadow puppet (wayang kulit) play, “Arjuna Wiwaha (Arjuna’s Meditation)” using one of the collection’s wayang sets from Yogyakarta, which will take place on November 6 from 6:00 PM to 7:30 PM. in the lobby of the Yale University Art Gallery.  The performance will feature court dhalong (puppeteer), Ki Suharno Ssn., and gamelan musicians from the Sultan’s court.  The musical accompaniment will be played on instruments of the Yale Gamelan, made available by the Music Department for the occasion.

The Sultan will also attend a Symposium, hosted by the Yale Council on Southeast Asia Studies on “Islam and the Arts of Java” on November 7, 4:00 PM to 6:00 PM Linsly-Chittenden Hall, 63 High Street, Room 102.

Additionally, on November 9, Wesleyan University will host a performance by the Yogyakarta court dancers and musicians featuring instruments of the Wesleyan gamelan at 7:30 PM in Crowell Concert Hall, 50 Wyllys Ave., Middletown.

Junior Achievement (JA) Singapore is a non-profit organization dedicated to inspiring, preparing and empowering youths for their future through life skill courses in entrepreneurship, work-readiness and financial literacy.  All courses are taught by volunteers from the business world and are offered free of charge to the students. 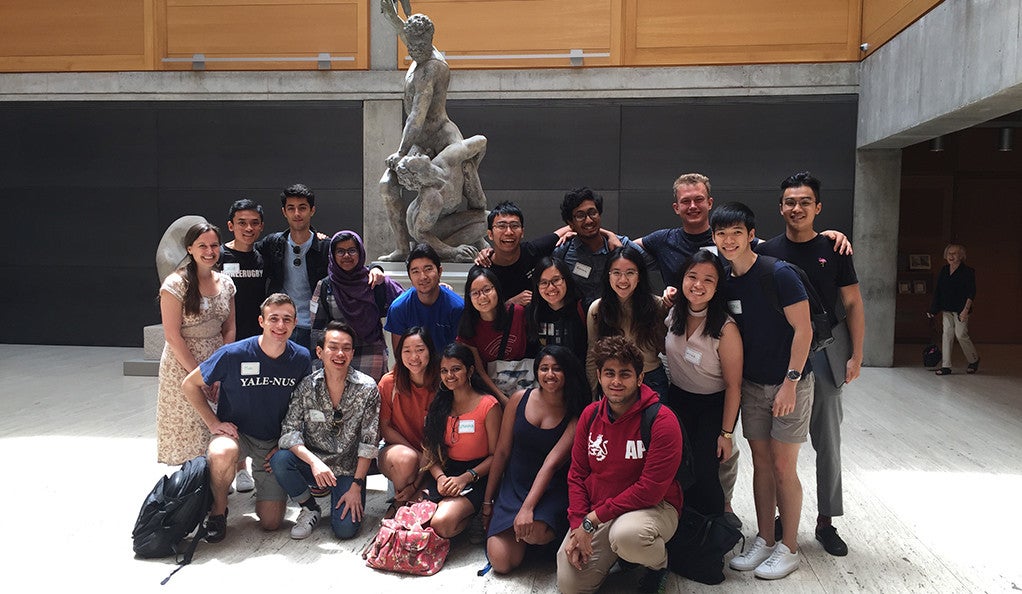 The inaugural Yale-NUS Summer Institute in Global Strategy and Leadership brought 39 Yale-NUS students to Yale in June for a five-week program designed to provide students with an in-depth and rigorous introduction to history, politics, social change, and a number of large-scale global challenges facing tomorrow’s leaders.

Adapted from Yale’s Brady-Johnson Program in Grand Strategy, the Summer Institute focused on the theory and practice of grand strategy from varying analytic perspectives. The curriculum also provided opportunities for students to apply these concepts to current global issues related to the environment, public health, and the movement of the world’s population. The program also sought to foster leadership development through exercises in group dynamics, persuasive writing, and an international crisis simulation. 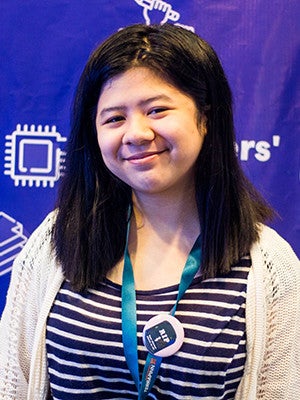 Yale undergraduate and social activist Chiara Amisola, a first-year student who plans to major in computer science, is the winner of the 2018 Student of Vision Abie Award.

The award will be presented as part of the 2018 Grace Hopper Celebration, held Sept. 26-28 in Houston, Texas. Hopper, who received her master’s degree (1930) and Ph.D. (1934) in mathematics from Yale, was a computer pioneer and naval officer.

The Student of Vision Abie Award honors young women dedicated to creating a future where the people who imagine and build technology mirror the people and societies for which they build.

Batik is a traditional wax technique for decorating cloth originating from Java. It is also an interesting medium for painting pictures. Participants at this open studio by Kamal Art (http://kamaldollah.com/batik/) will be introduced to the traditional methods and be guided on the proper use of tools and processes like waxing with the ‘tjanting’ and dyeing. Newbies will work on 20cm by 20cm squares.

No pre-requisite skills required. All materials provided. Please do not buy any art materials prior to attending. You may bring in dinner, but halal food only.

Fee: $20 per student, to be paid at the class
Registration: Email Sarah at sarah.ong@aya.yale.edu. Guests are welcome but note that the minimum age is 9 years old, and that there is no handicap access to the 3rd floor where the studio is.

LIVING IN A SACRED COSMOS:
Indonesia and the Future of Islam

The future of Islam lies in Asia. Is there hope for peace and justice between Islam and the West?  An answer may lie in the ancient, unique civilization of Indonesia, where modern, religious people still live in a sacred cosmos. Indonesia is experiencing an Islamic renaissance: a flowering of religious ideas, art, literature, architecture, institutions, and intellectual creativity, stimulated by civil freedoms, democracy, education, and prosperity. This community is more religiously diverse than it has ever been, even though it is threatened by growing Islamic radicalism. What do Muslims think about democracy, scientific rationality, and equal human rights for all, especially for women and non-Muslims? How do Muslims respond to the global environmental crisis? This book addresses these questions through the lens of empirical research on the views of people in Indonesia, the largest Muslim country in the world.

“Here is a prophetic, erudite, surprising voice from Islam’s largest country and most promising democracy. A philosopher and social scientist, Professor Adeney intimately understands the challenges, strengths and failings of this experiment in democracy. Indonesia accommodates astonishing religious, ethnic, and political diversity. Professor Adeney shows how Indonesian informants negotiate between seemingly incompatible languages of scientific rationality, religious conviction, and experience of an unseen world, and the absurdity of expecting a ‘sacred cosmos’ to disappear into modern rationalism or religious dogmatism. Indonesians have much to teach the world about the civilized and dynamic coexistence of multiple world views both in ourselves and in complex societies.”
–Anthony Reid, Professor of History, Australian National University

Bernard Adeney-Risakotta was born in China of British and American parents. He was founding director of the Indonesian Consortium for Religious Studies (ICRS) at Universitas Gadjah Mada in Yogyakarta. He studied in Wisconsin, London, and Berkeley, where he taught for nine years before moving to Indonesia in 1991. Among his many publications is Strange Virtues: Ethics in a Multicultural World.