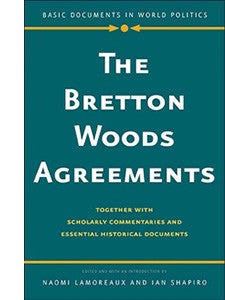 The Bretton Woods Agreements, published by the Yale University Press is a newly released book which showcases the namesake agreements of 1944. Edited and with an introduction by Naomi Lamoreaux, the Stanley B. Resor Professor of Economics and professor of history, and Ian Shapiro, Sterling Professor of Political Science. A description is provided below from the Press.

The two world wars brought an end to a long-standing system of international commerce based on the gold standard. After the First World War, the weaknesses in the gold standard contributed to hyperinflation, the Great Depression, the rise of fascism, and ultimately World War II. The Bretton Woods Conference of 1944 arose out of the Allies’ desire to design a postwar international economic system that would provide a basis for prosperity, trade, and worldwide economic development.

Alongside important documents and speeches concerning the adoption and evolution of the Bretton Woods system, this volume includes original essays on such topics as why the gold standard was doomed, how Bretton Woods encouraged the adoption of Keynesian economics, how the agreements influenced late-20th-century ideas of international development, and why the agreements ultimately had to give way to other arrangements.