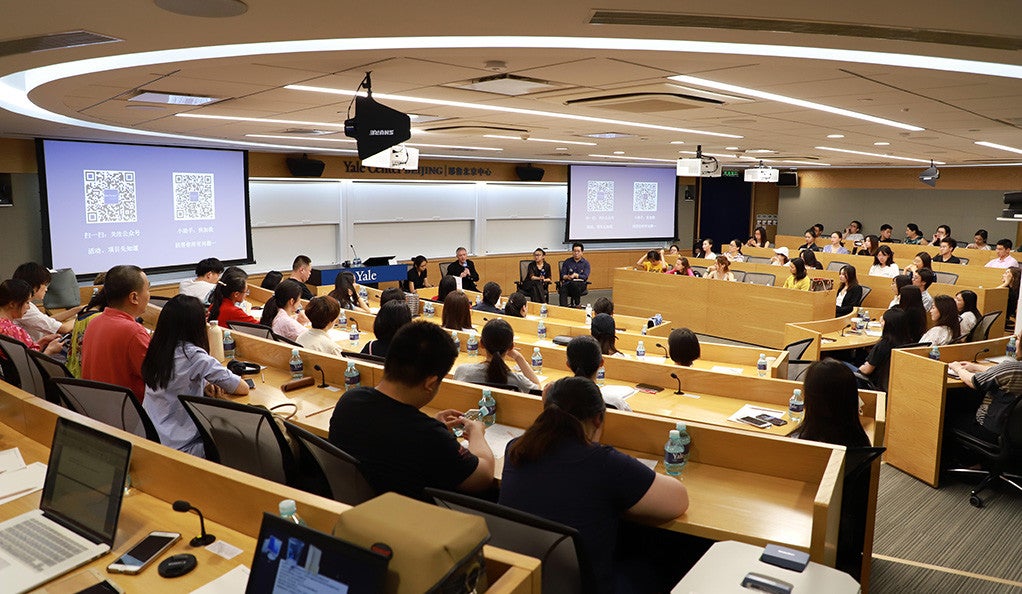 “Theater is the art of light,” said Yale professor Yuri Kordonsky during a recent discussion at Yale Center in Beijing.

On the evening of June 26, over 80 participants gathered the center for a dialogue between two renowned theater experts: Kordonsky, professor in the practice of directing at the Yale School of Drama, whose productions have received numerous international awards, and Liu Tianchi, associate professor at China’s Central Academy of Drama, who is renowned for her mentoring role on two hit Chinese TV shows, “An Actor Is Born” and “I Am The Actor.”

Kordonsky and Liu shared their views on theater as well as how acting affects our perception of the world around us. Their dialogue was part of the Greenberg Distinguished Colloquium series at the Yale Center Beijing. The colloquium is made possible by the generosity of Maurice R. Greenberg, chair and CEO of C.V. Starr & Co. Inc. and a recipient of the China Reform Friendship Medal in 2018.

Kordonsky, who did not enroll in acting school until after finishing his college degree in mathematics and computer science, said that theater, from hobby to vocation, is the most pleasant surprise. Liu, who discovered her gift of acting at an early age, said that theater is destiny.

Despite their different backgrounds and experiences, Kordonsky and Liu found much common ground during their conversation. Kordonsky said he defines acting as a psycho-physical embodiment of storytelling, while Liu said she sees an actor as a capable gamer. To excel at the game of acting, Kordonsky contended, imagination — the ability to live a rich life in imaginary circumstances — is key, while Liu held that an “ability to believe in everything” is necessary.

“We regularly ignore the vast majority of the richness in our world around us,” Kordonsky told the audience members. “An actor needs to learn the world around us and learn to respond to the world.”

“To provide an education for aspiring actors,” said Liu, “we need to create an absolutely safe space in which students can touch, smell, feel, see, and talk to each other.” Theater, she asserted, “is a game for the brave and the focused.”

Kordonsky and Liu agreed that theater is also inherently philosophical. “Shakespeare, Chekhov, Sartre … all the great playwrights were great philosophers as well,” Liu told the audience. “If you want to act well, you need to get onto the level of those philosophers.” 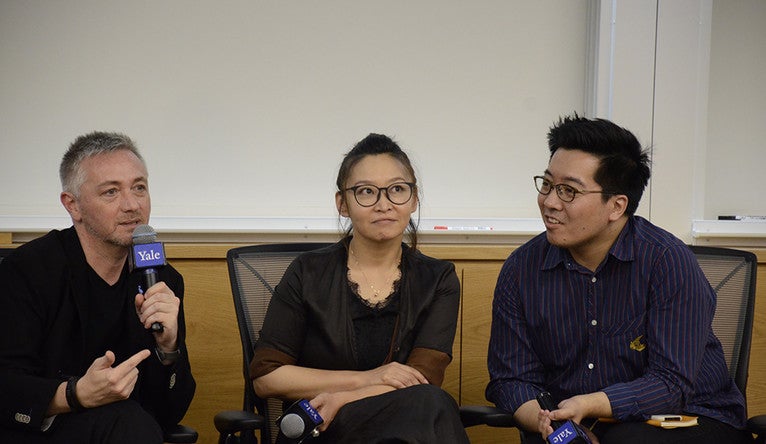 Yuri Kordonsky (left) and Liu Tianchi (center) during the discussion.

During the Q&A session, members of the audience raised questions that sparked debates about the roles people play in real life and the current challenges facing global theater. Liu said that switching between our roles in everyday life may not be as mysterious as it seems — that as we function in various roles in life, we are guided by our changing behaviors. Theater, said Kordonsky, is ultimately a human exercise.

The two experts also considered the difficult issues facing theater today — such as the critical lack of funding for small, independent theaters in both China and the U.S. Liu advised aspiring actors to be certain that theater is their true passion before deciding to embark on a career in acting, for financial constraints can be a real challenge in the theater industry. Kordonsky acknowledged the financial difficulties, but contended that acting does not need to be confined to the stage, and that even amateur actors can achieve spiritual enlightenment through acting.

Promoting in-depth discussions such as this one is part of the central mission of the Greenberg Distinguished Colloquium, which seeks to convene leaders from all sectors who play active roles in building bridges among China, the United States, and the rest of the world.

The Yale Center Beijing, Yale’s first university-wide center outside of the United States, is a convening space and intellectual hub that advances the Yale’s mission to improve our world, and develop leaders worldwide who serve all sectors of society. Founded in 2014, the center acts as an activity space for Yale’s collaborations in China, enables the university to expand existing activities and form new partnerships, supports research and study from each of the university’s schools and divisions, and serves as a gathering place for alumni from throughout Asia.