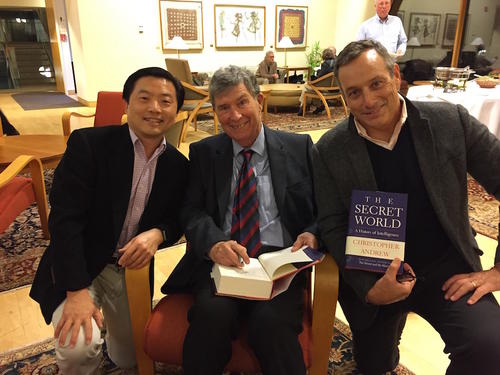 Christopher Andrew, Emeritus Professor of Modern and Contemporary History at the University of Cambridge and former Official Historian of British Security Service MI5, delivered this year’s Stimson Lectures on World Affairs, a series of three lectures that took place over the course of the first week in November at the MacMillan Center. Known for his scholarship on the history of intelligence, he addressed the topic “The Lost History of Global Intelligence—and Why It Matters.”

Throughout the three lectures, Andrew stressed a few overarching themes. He noted that although the strategic importance of signal intelligence (SIGINT) is commonly accepted, there is a surprisingly poor understanding of its history. “No WWII or post-WWII profession was as ignorant of its own history as the intelligence community,” he said, attributing this ignorance to the inherently clandestine nature of espionage operations. Because of its ignorance of its history, the intelligence community is unable to learn from past mistakes. Andrew said, “intelligence history is not linear… it sometimes goes backwards.” He also expressed frustration at how modern SIGINT is commonly seen as more advanced than SIGINT in history, using as an example the code-breaking superiority under Queen Elizabeth I compared to that of Franklin D. Roosevelt.