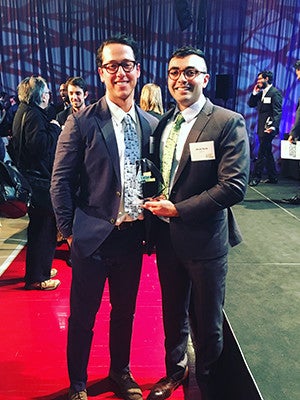 Nearly two years ago, Andrew Rothaus ’11 B.A., recalls, he had a conversation with his sister-in-law who was pregnant and living in Miami, Florida, the U.S. state with highest confirmed cases of Zika virus. “She was nervous,” he says. Rothaus was already at work developing a new technology — involving a patented, multi-armed molecule called HAPI™ — and wondered if he could use it to make a long-lasting mosquito repellent.

He called up his former Yale roommate, Dr. Abraar Karan ’11 B.A., who is currently a physician at Brigham and Women’s Hospital. Both alums went to Harvard following graduation — Rothaus to Harvard Business School (he graduates this year) and Karan to Harvard School of Public Health.