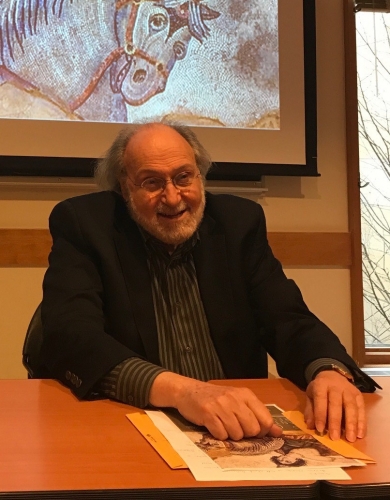 On Monday, February 26, the Hellenic Studies Program at the MacMillan Center hosted a presentation by Dimitri Gutas, Professor of Arabic and Graeco-Arabic, Yale University, on “Hellens, Romans, Christians, Arabs, Turks, Romioi: Greeks Studying Hellenism.” The talk is the first of a series called “Post-Antiquity Revisited” and is dedicated to Professor Gutas, who is retiring.

Professor Gutas states in his article, The Historical and Ideological Dimensions of Graeco-Arabic Studies: The Conquest of Knowledge from Alexander the Great to Meḥmed the Conqueror, “The Graeco-Arabic translation movement of the early ʿAbbāsid period (eighth to tenth centuries) is not an isolated cultural phenomenon, but is part—indeed, arguably the most important and central part—of a long historical process…” In his presentation, he notes that the scholarly discipline of historical linguistical transfer of one culture’s philosophical works, including medicine, mathematics into Arabic was critical in shaping of information and knowledge that spanned hundreds of years. The very expensive and time-consuming translation movement, in discussion, spanned from approximately ca. 850 with the beginnings of Syriac translations of Greek philosophical texts to ca.1330 with the Hermannus Alemannus in Latin and Todros Todrosi in Hebrew. While transfer movements are often known in linear forms, this was not the case according to Professor Gutas. The entire movement was complex and critical in helping to shape the dissemination of interdisciplinary subjects. These core subjects addressed various socio-political underpinnings of their time bringing together visionaries, thinkers, ideas from the far East and Europe into Baghdad—a city which became a hub of knowledge exchange. The movement furthermore, became a major social, political, system that propelled many types of ancient Greek knowledge forward. It is also established that Syriac became a strong intermediary or liaison system for the movement of Greek works into Syriac and into Arabic for codification and use by the caliphates. Professor Gutas credits the success of this dissemination to Aristotle’s innovation to organize and classify knowledge. Aristotle provides us with theoretical knowledge (metaphysics), the practical sciences (governance in regular city life and structure, ethics), productive sciences (creation of rhetoric in order to instill better political influence).