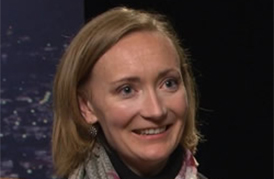 Scholars of twentieth-century European literature have long considered the importance of youth and youth culture within modernist literature. In a recent book, Professor Leslie Harkema seeks to bring turn-of-the-century Spanish literature into this conversation. In Spanish Modernism and the Poetics of Youth: From Miguel de Unamuno to La Joven Literatura (2017, University of Toronto Press), Harkema explores the idea of youth within the Spanish context. She also traces what youth meant within ideas about Spanish national development.

One of the central figures of the book is Miguel de Unamuno, a writer and public intellectual often associated with Spain’s “Generation of 1898.” Harkema is particularly interested in Unamuno’s relationship with younger writers from a school that referred to itself as “la joven literatura” (“the young literature”). Harkema became interested in Unamuno as a graduate student, when she translated some of his poems into English. Unamuno has largely been studied as a novelist, but while working with his poetry, Harkema “realized that younger writers of the next generation thought about him a lot, and wrote about him, and appreciated his poetry … It turns out that Unamuno wrote constantly about youth and to youth.” Unamuno’s poetry—and younger writers’ engagement with it—offers a new window into the importance of youth within Spanish modernist writing.