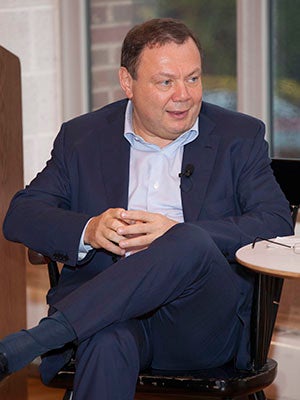 Mikhail Fridman, the international businessman and co-founder of LetterOne, the international investment firm, spoke recently at Yale about both his inspiring rise from humble beginnings and his growing role as a leading philanthropist of Jewish and other causes.

Fridman gave a talk at the Joseph Slifka Center for Jewish Life at Yale, home of Yale Hillel. He was introduced by Eric Fingerhut, the president of Hillel International.

“He is an active supporter of Jewish causes around the world. He co-founded the Genesis Prize, which is awarded annually in Jerusalem,” Fingerhut said. The $1 million Genesis Prize honors individuals who have attained excellence and international renown in their chosen professional fields, and who inspire others through their dedication to the Jewish community and Jewish values.