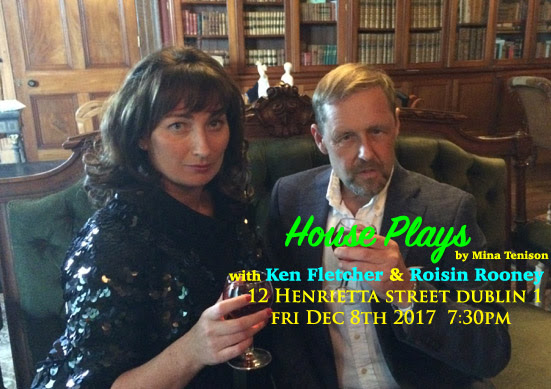 The venue is the landmark townhouse at 12 Henrietta Street, Dublin 1 and the event is a special benefit performance in support of An Taisce.

The Yale Club has signed up to be sponsors, which means we’re on the hook for eight (8) tickets, which is not many, especially when the tickets are a steal at only €50. I betcha we could get more tickets if there is demand. If you would like a ticket – or indeed two, as you should bring your partner/spouse/friend/culture-buddy – then e-mail me at ciaran@aya.yale.edu.

The play is a performance of House Plays, written and directed by Mina Tenison ’92.  The schedule for the evening is:

The storyline? Clare leads the enviable life of big houses & privilege, or so it seems…Raised in a big Georgian house in Ireland in the lap of privilege, Clare is finding that her enviable life is breaking apart at the seams. The story is humorous, bittersweet and a little tragic. The actors – Ken Fletcher and Roisin Rooney – mix with the audience throughout the play, breaking down the “fourth wall.”

If you can sponsor food, wine or a spot-prize for the raffle, then that would be great too, let me know.

An Taisce is a charity that works to preserve and protect Ireland’s natural and built heritage. An Taisce is an independent charitable voice for the environment and for heritage issues.

Twelve Henrietta Street was built between 1730-33 by the property developer Luke Gardiner. It was dramatically altered in 1780 by Richard Boyle, the second Earl of Shannon, who combined two adjacent houses to create a palace for himself. After his death in 1807 the two buildings were divided once again. The first floor features magnificent long windows that were installed by the second Earl of Shannon and shows off one of the grandest entertaining spaces still extant in the city of Dublin. A closer look at the details will reveal the original wood floors and some of the beautiful architectural
elements from 1780s.